This article will be going through the basic to advanced concepts of the MACD (Moving Average Convergence Divergence) oscillator.

There are several indicators used by traders for various reasons. One of the most popular indicators is the Moving Average Convergence and Divergence oscillator. It is commonly referred to as the MACD indicator.

MACD is a powerful indicator as it can be interpreted in many ways to speculate on the financial markets. In this article, we will be going through the fundamentals of MACD, different ways to interpret it and understand how to trade using the MACD indicator.

As the name suggests, MACD is an advanced derivation of the moving averages developed by Gerald Appel in 1979. The indicator depicts the relationship between two moving averages of an instrument. It was primarily created as a tool for timing the market.

How is the MACD Created?

The MACD indicator is built using two exponential moving averages with a different period, where the difference between them yields the Fast line. Another average of the specific period becomes the Slow line.

Following are the steps to build a MACD with the standard settings:

Luckily in Metatrader and most of the other trading platforms, MACD comes as a standard indicator, so you don't have to carry out the above calculations manually. 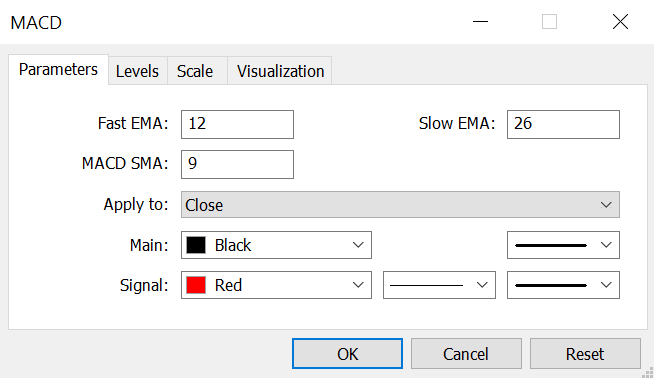 In the below example, the red line on the MACD is the slow signal line, while the histogram represents the fast MACD.

The price of the instrument depicts a consensus of value for a given period. And a moving average determines the mean consensus for that period.

A long period Exponential Moving Average on the MACD reveals a long-term consensus, while a short period EMA manifests the consensus in the recent market.

In other words, the fast MACD line formed by the subtraction of the averages discloses the short-term price action, while the other assesses the long-term price evaluation.

Some of the most used interpretations of the MACD indicator include:

With every interpretation, there are several strategies on how to trade using the MACD indicator. Let’s dive into each method and a strategy supporting the same.

With every interpretation, there are several trading strategies based on the MACD.

How to trade using MACD with Signal Crossovers

The simplest way to trade using the MACD indicator is by signal crossovers.

In a sense, when the fast MACD (main) line passes over the slow signal line, it signifies that the market has begun to show bullish sentiment, and the same is expected to continue in the coming sessions as well.

Conversely, when the mainline crosses below the slow line, it indicates that the sellers have begun to dominate the market.

Consider the below chart of USDJPY on 1-Hour time-frame. The price was moving in a narrow range, with the red lines representing the support and resistance level.

At one point, the price tried to break above the resistance but failed to hold above it effectively.

When the market broke back below the resistance, the fast MACD, which was trading above the slow line, crossed through the slow line.

This indicates that the sellers at the resistance are still not done yet. Thus, one can trigger a sell nearby the top of the range.

The stop-loss must be placed right above the resistance level, as shown.

The take profit for such trades can be placed at the bottom of the range. If the sellers' momentum is coming strong, you might as well hold let the trade run longer until the subsequent hurdle point.

How to trade using MACD as an Overbought and Oversold Oscillator

The MACD can be interpreted as an oscillator as well. It can be employed to determine oversold and overbought levels in the market.

Unlike oscillators like RSI, MACD does not have any specific overbought and oversold values. Due to which traders use the MACD indicator in conjunction with other indicators to generate buy and sell signals.

Instead, let’s look at a strategy that provides trading signals solely based on overbought and oversold regions on the MACD.

Since there are no specific overbought and oversold values, we obtain them using the extreme.

Open a chart with the MACD indicator and zoom out to the maximum point. Then find the peak and trough on the MACD oscillator.

These levels hence become the overbought and oversold areas of that instrument. Subsequently, we incorporate the crossover method at these locations to enter a trade.

Below is the chart of the Great British Pound against the US Dollar on the 1-Hour time-frame. The chart is zoomed out completely to determine the overbought and oversold regions.

Focusing on the price chart, we see that the market broke above the Support and Resistance, indicating that the buyers dominate the market.

After a few swings, the price dropped until the Support and Resistance level. At the same time, the market reached the oversold region.

Thus, when the fast line crossed over the slow line, we can prepare to go long as it is a confirmation that the big buyers are back in the market to shoot it north.

The ideal stop-loss for such trades would be few pips below the Support/Resistance level. For this trade, it would rather be safer to place it below the tail of the candle.

The logical take profit placement would be at the demand areas. However, based on the momentum of the market, you can adjust the TP level accordingly. That said, the risk-reward ratio must be monitored as well.

How to use MACD oscillator to Trade Divergences

Divergence is the most popular and effective technique to trade using the MACD oscillator. MACD Divergence indicates both reversals and trend continuation. Before getting right into the strategy, lets touch base on the theory of Divergence.

What is Divergence in Trading?

Divergence is a scenario in the market where the price movement disagrees with the oscillator movement. As a result, they move apart in the opposite direction.

It usually occurs during a trending market and signifies that there can be an upcoming reversal around the corner.

There are Two Types of Divergence

Regular divergence hints an upcoming reversal in the market. It gives signs that the market which is in an uptrend is preparing to trend south and vice-versa. They are referred to as regular because they appear often and are easy to spot.

Hidden divergence is found in a newly formed trend or middle of it and indicates the continuation of the same trend. They occur occasionally and are challenging to spot.

Plotting Divergence on the MACD can be extremely difficult at times. In fact, a divergence drawn incorrectly could generate failing signals.

That's why we have developed a free MACD Divergence indicator that automatically plots regular and hidden divergences on the chart.

A downtrend does not turn into an uptrend instantly and vice versa. Instead, it consolidated before beginning a new trend. And a divergence on MACD can give hints and clues that the market is preparing to start a new trend.

Consider the situation shown below of EURUSD on the 1-Hour time-frame. Observing the price from left, we can see that the market in a downtrend, making lower lows and lower highs. On the latest lower-low, the MACD has made a higher-low. This is a sign that the market is gradually preparing to switch direction.

Note that one cannot open a buy trade right after the divergence shows up. There are a few more confirmations that are needed to confirm the same.

After the divergence has occurred, we wait for the price for failing to make a new lower low. Later, when the breaks above support/resistance level, we can trigger the long positions as marked on the chart.

Logically, one must place the stop loss at the recent low. Because if the price breaks below the low, it would mean that the downtrend is not done yet.

The take profit can be placed at a potential supply area. Else one could partially book profits and close the rest after the market breaks below the trendline.

Advantages and Disadvantages of using the MACD

Now that we’re cemented on how to trade using the MACD indicator let's conclude the article with some pros and cons.

We hope you got a clear idea of how to trade using the MACD. Please make sure to practice these strategies on a demo account before trading them on a live market.

Featured Product of the Month

How to Use Fibonacci Retracement Tool in Forex