Support and Resistance Trading Strategies You Must Know in 2020.

In technical analysis, there are several types of traders. Some trade using indicators, some by applying price action concepts, while the majority trade by spotting some chart patterns.

But all these technical traders have one trading concept in common – the concept of Support and Resistance.

Support and Resistance is a fundamental concept extensively used by technical analysts. In fact, it is also comprehended by fundamental analysts for precise entry and exit of trades.

With its importance in mind, let’s get our feet wet by understanding the S/R concept, how to draw them correctly, and some effective support and resistance trading strategies as well.

What exactly are Support and Resistance?

Support and Resistance are price levels in the market where the price could turnaround in the opposite direction based on supply and demand forces. They go hand in hand with the psychology of buyers and sellers. 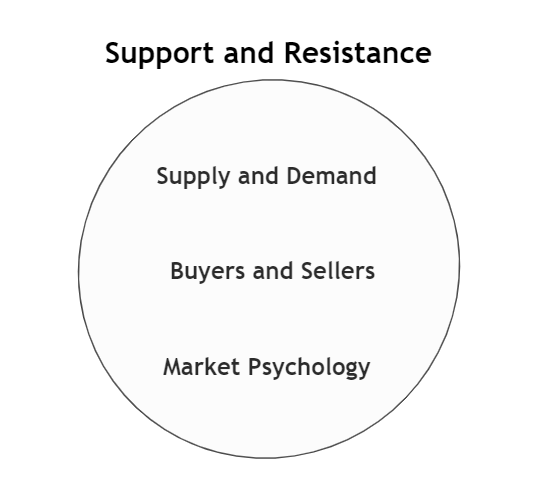 Support is a price level or area where there is a high demand for security, which prevents it from falling further. Due to higher demand than supply, the price rises from the support level.

In terms of buyers and sellers, Support can be termed as an area where the buyers tend to hold power by triggering long positions.

Emotions and psychology also cause support levels to hold. And since countless participants are going through the same thought process, these levels are essential to incorporate in technical analysis.

Resistance is the price level or area in the market where supply surpasses the demand for security. Consequently, the prices fall from that specific price level.

It can also be defined as where the sellers tend to become powerful by selling their securities in large amounts.

The Psychology behind Support and Resistance

We must comprehend the psychology behind these levels before going into support and resistance trading strategies.

How to Find Legitimate Support and Resistance Levels

There are countless Support and Resistance levels that can be spotted in every single chart. However, not all of them are significant.

In other words, there are some levels where the market fails to hold and breaks through it. Hence, merely understanding the definition of Support and Resistance is insufficient to trade in the market.

Will the Support and Resistance Hold or Not? Answering this question is the key while we trade the market using different support and resistance trading strategies. To answer this, two critical points must be considered – Strength & Length.

The power of buyers or sellers from the Support and Resistance areas determines whether a level is real. By 'power,' we mean how quickly the price reacted from the level.

If there is massive strength from the buyer at Support or the seller at Resistance, it indicates that these levels are strong, real, and likely to sustain.

In addition to both parties' strength, the distance traveled from the Support and Resistance plays a vital role in determining legitimate levels.

If the market bounces off from a support or Resistance with significant length, that level can be considered real, and possibly respect the next time.

How to Draw Real Support and Resistance Levels?

Real Support and Resistance levels are those that satisfy the criteria of both strength and length. Let us take a few examples to understand the same.

Below is the price chart of EUR/USD on the 1H time frame. Focusing on the two down arrows, both times, the price dropped sharply and the market longer in the second stretch. Thus, one can draw the line at this price (1.13394) and confirm that it is a potential Resistance. 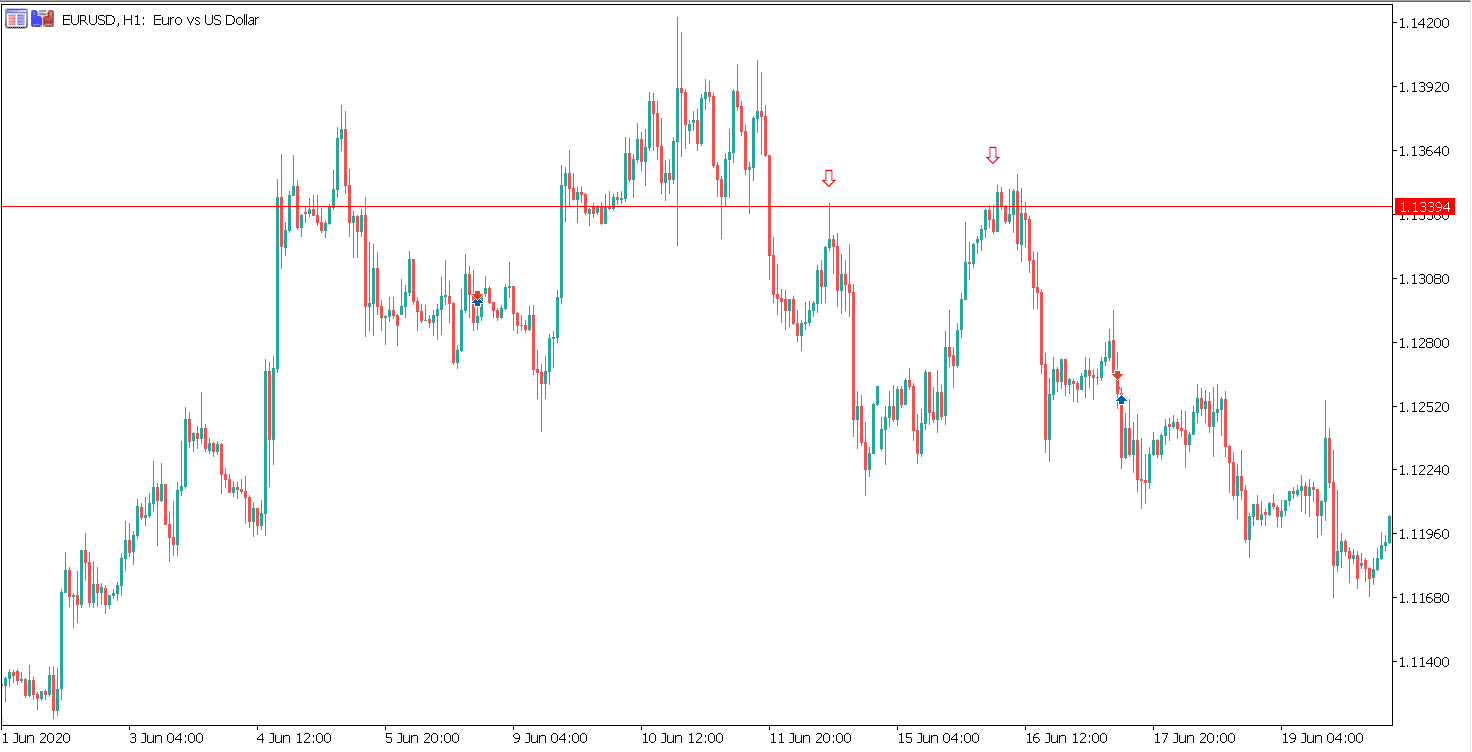 Moving the price forward, we see that the price did hold and fall from the Resistance the third time. 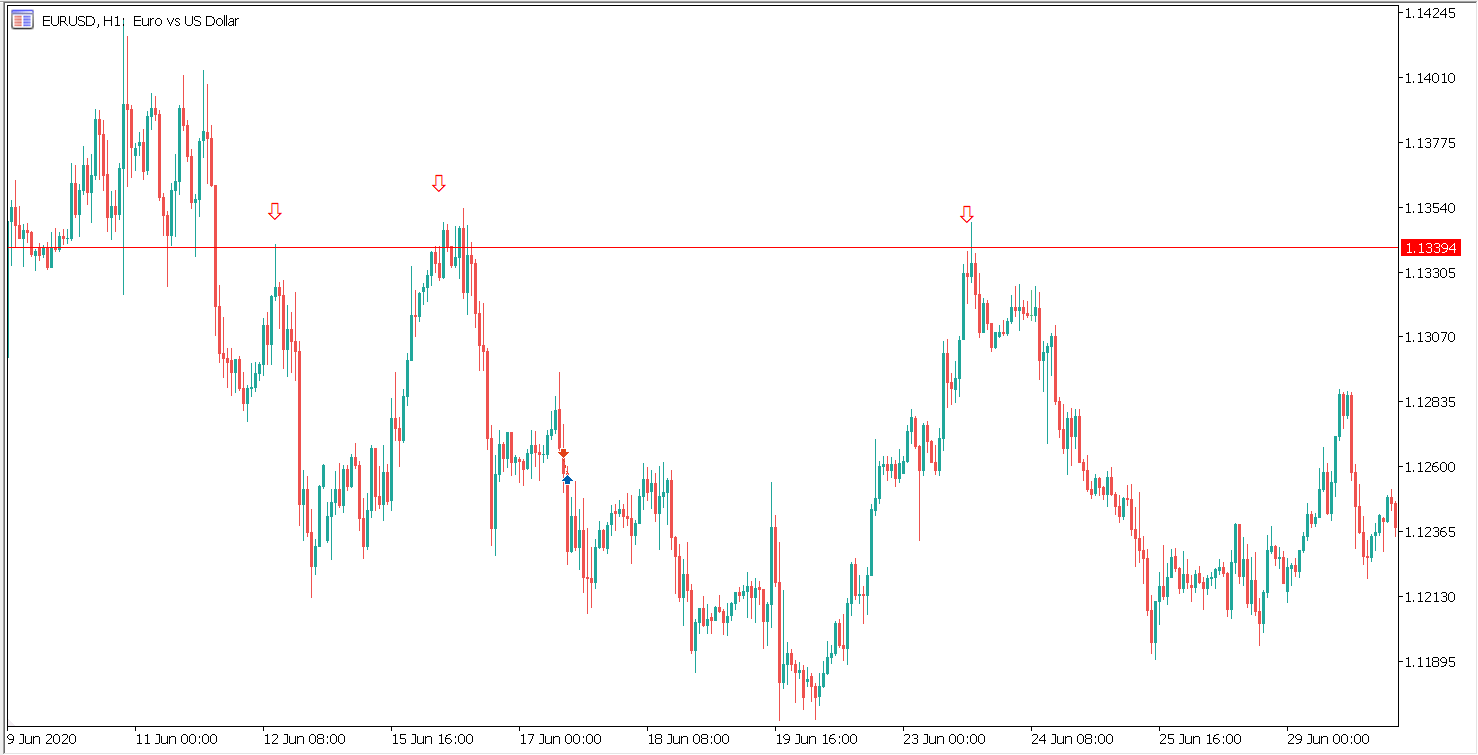 The chart below shows that the market reacted off firmly twice at the level 1.07868, indicating legitimate Support. Since the buyers were strong in terms of power and length, the level is expected to hold again. 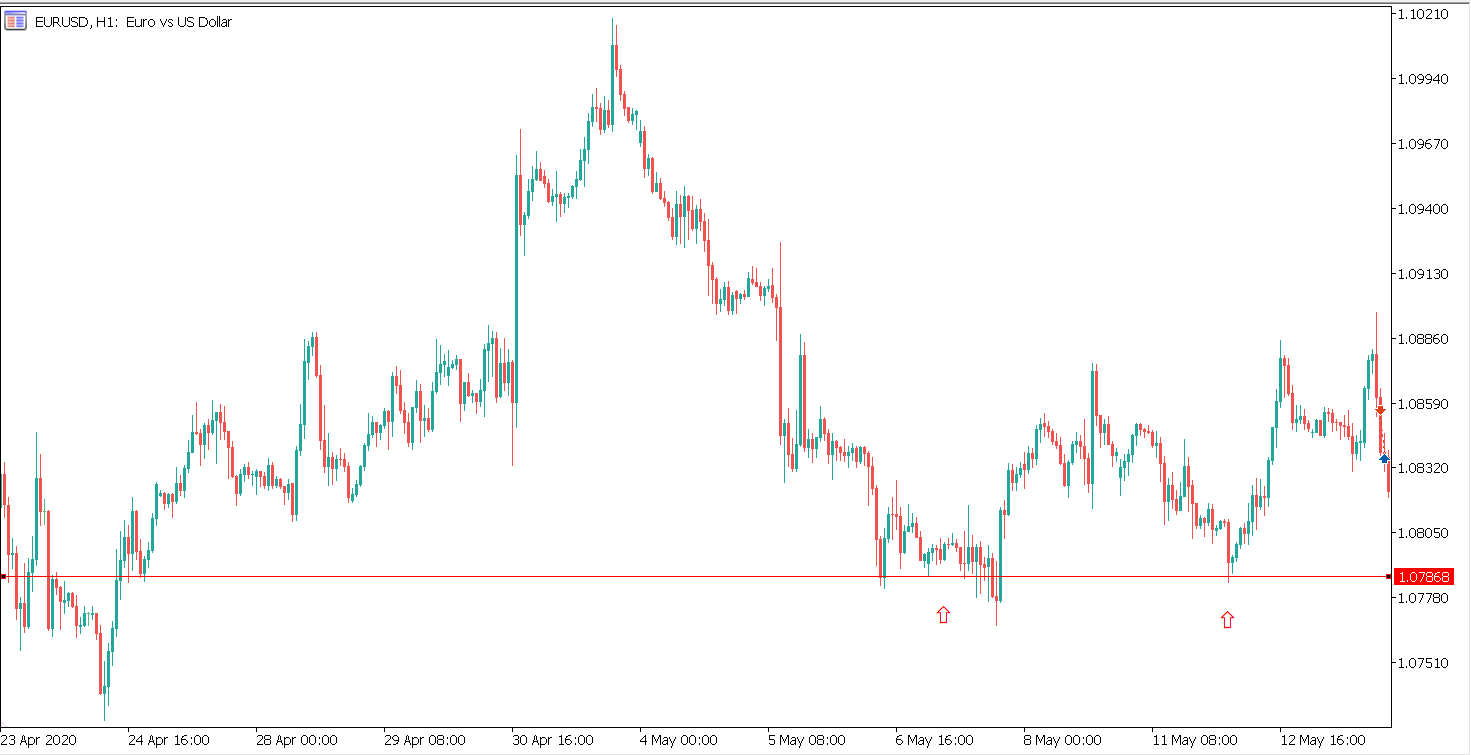 In hindsight, it is seen that the market did hold the subsequent time at the support level. 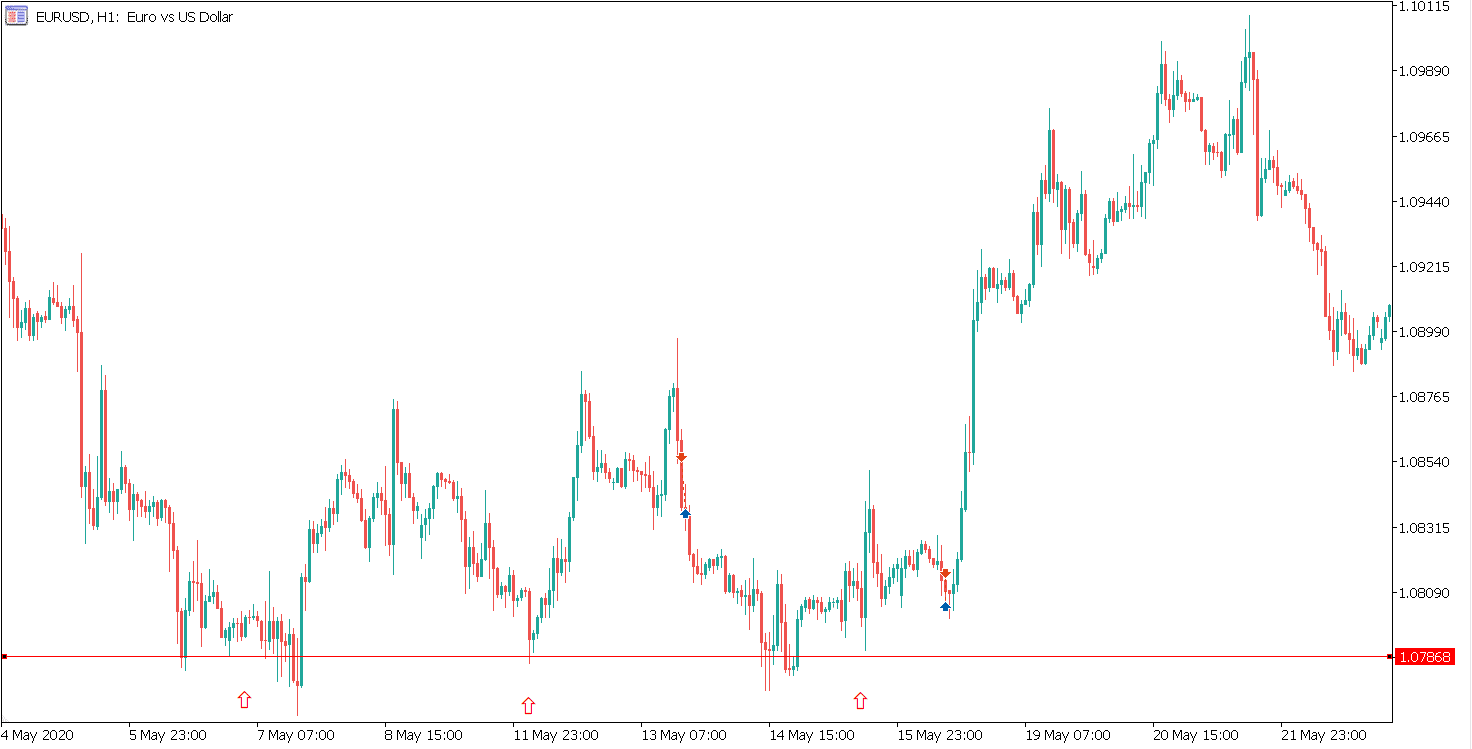 When the market breaks above Resistance, the same level now becomes a Support level.

Likewise, when the market breaks below Support, the level becomes a Resistance level.

The first Support and Resistance trading strategy is based on a trending market.

This support and resistance trading strategy is centered on the concept of trend pullback. When price breaks through a Support or Resistance, we wait until the price pulls back to the broken level.

Then, using the theory of Support and Resistance and false breakouts, positions are taken in the market. Let us consider an example to understand the same.

However, though the concept of Resistance indicates a sell trade, we wait for another vital confirmation. 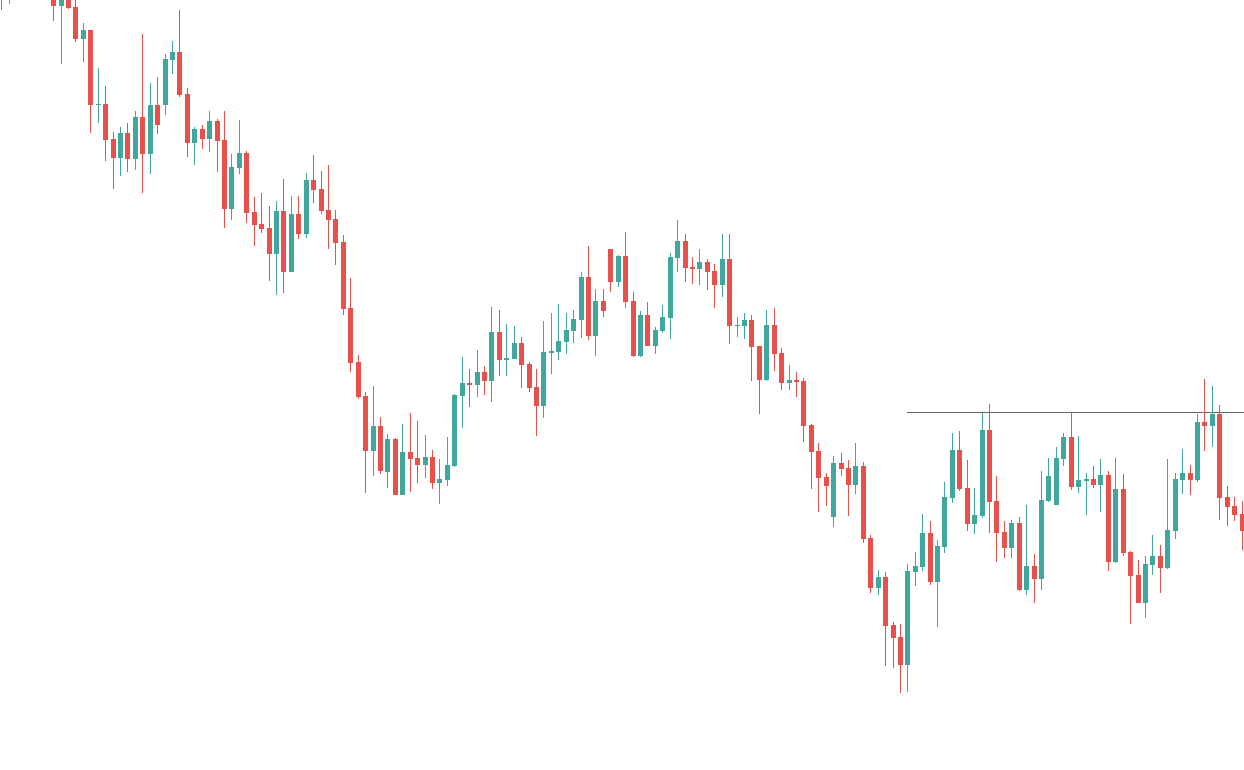 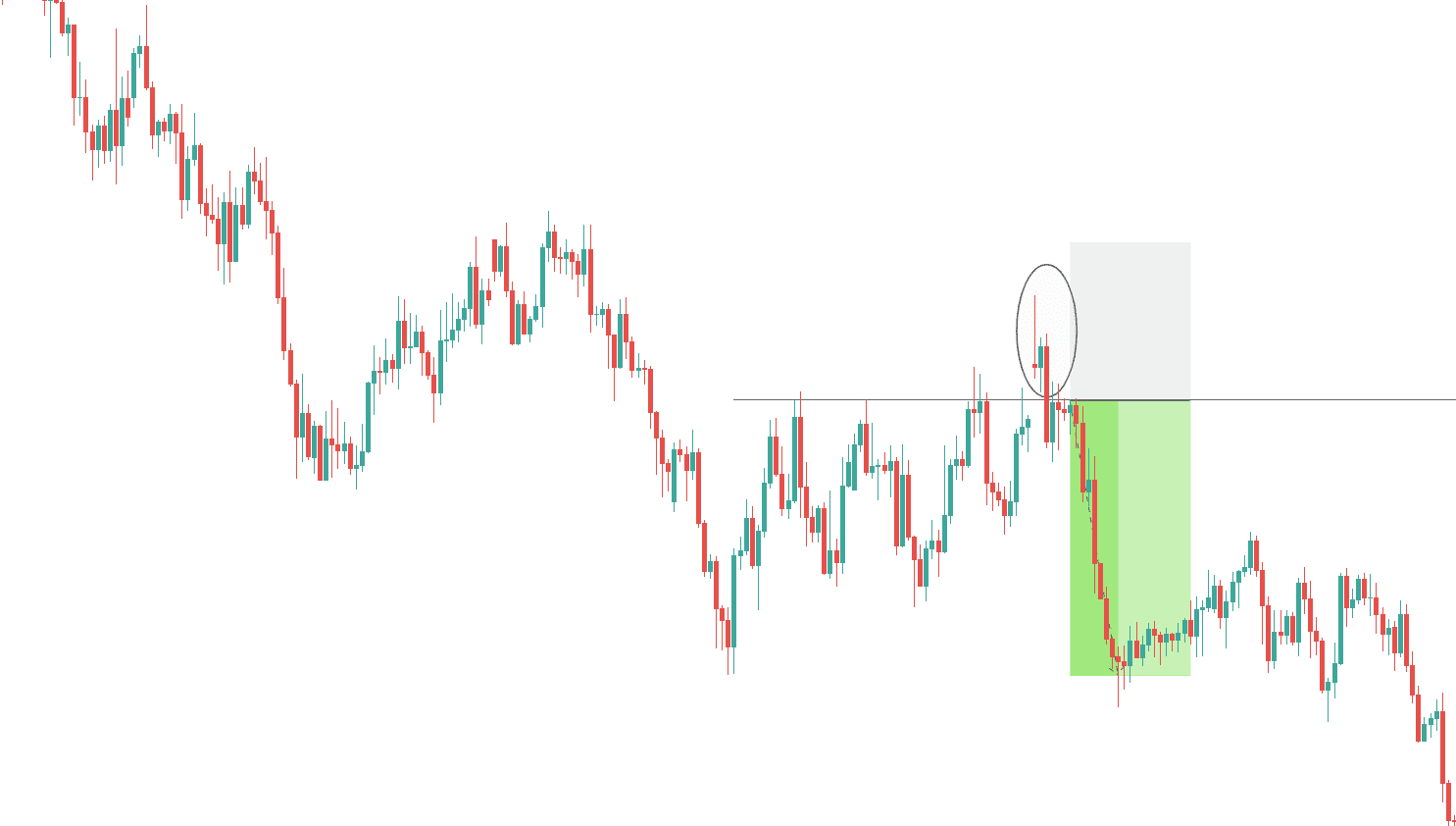 A stop-loss placed right above the high of the false breakout can keep a trader from getting stopped.

The safest take-profit can be placed at the recent lows. If the momentum of the sellers is getting stronger, a trader could aim for much lower levels.

The second Support and Resistance trading strategy is based on the concept of multiple time frames and market reversals.

A couple of time frames are used in this strategy – the higher time frame to determine the forecasting direction and potential Support or Resistance level, and the lower time frame to milk the existing trend and enter precisely.

Without any more theory, let’s head to the trade example.

Below is the price chart of the Pound against the Swiss franc on the Daily time frame. The overall trajectory of the market is sideways.

The grey ray represents the support level, as the market successfully held thrice at the price level 1.22650.

Thus, we can expect the price to hold subsequently as well. To get an added confirmation and ideally trigger the order, let’s go lower a time frame.

Below is the same chart on the 4-hour time frame. Focusing on the market from August, the market began to fall aggressively, making lower lows and lower highs.

In late August, the market reached the Daily Support, and the price reacted up sharply.

Following the buyers' strong reaction at the Support, the price started to make higher lows sequences. A higher low signifies that the big buyers are buying the currency at many high prices.

Considering the sharp reaction from the Support and the price action showing higher lows, one can open long position on GBP/CHF.

A logical stop loss for such trade set-ups would be a few pips below the support level. After some experience, it can be pushed higher – right below the recent higher low.

Since the price 1.28549 is a critical supply zone, the take profit can be placed at these levels. Given the momentum of the buyers, one can ride their trade too much higher levels as well.

There are several trading concepts, but Support and Resistance stand to be the most crucial in technical analysis.

Many novice traders enter the market without any strong technical background. Besides, some experienced traders still find it challenging to mark support and resistance levels correctly.

Considering this, we have designed an algorithm that automatically plots significant Support and Resistance levels on the chart.

The KT Support and Resistance indicator remove the opacity on different ways to plot S&R levels and automatically draws these levels following a robust algorithm that uses a unique multiple-timeframe analysis. 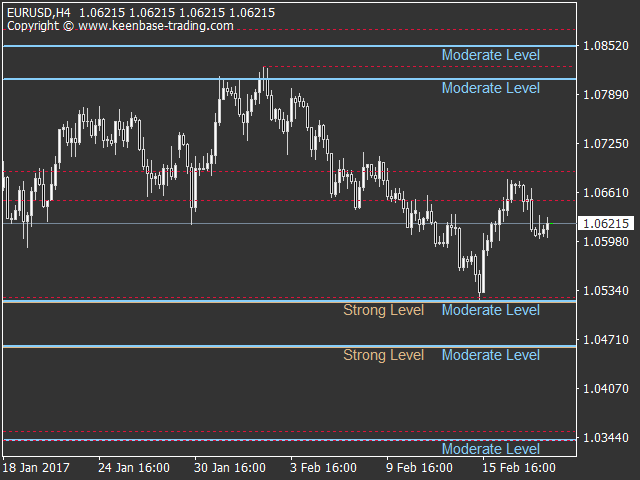 Precisely, it immediately scans the significant levels in every available timeframe and puts it forth on the charts for simplified analysis.

Types of S/R Levels plotted by the indicator

The KT Support and Resistance indicator plot four types of S/R levels based on the levels' strength. The four levels are ranked and named as:

These levels are the most substantial levels among all. Price is very likely to respect "Super Strong Levels" and often bounce back after testing them.

These are also substantial levels and price often respect them but not as much as their predecessor. If price breaks them with a significant margin, you can expect a continuation in the same direction.

If you are a day trader, you should keep an eye on these levels. Immediate trade entries around these levels should be avoided to prevent unnecessary losses.

These are comparatively weaker levels plotted using a singular time frame analysis. If you are a day trader or scalper, you may use these levels to decide a stop loss and profit target.

Trading breakouts is one of the most popular and reliable trading strategies using support and resistance. However, the strategy works only if the levels are drawn correctly.

With that said, traders can be assured about the support and resistance levels using the KT Support and Resistance indicator. It filters out the insignificant levels that have lower possibilities to hold.

Following is a support and resistance trading strategy that is designed using this automated indicator.

The strategy is based on the break of support and resistance levels. When the market breaks above or below a potential S/R level, we prepare to go long or short after a shallow pullback.

Consider the below price chart of GBP/JPY on the 4H time frame. The bottom and top levels are moderate S/R levels, while the level in the center is strong.

The market held below the Strong S/R level on 17th September and breached through it on 11th October with bullish candlesticks, indicating a strong uptrend in the market.

Also, since the price broke above a vital S/R level, traders can trigger the buy order right after the breakout.

However, conservative traders can wait for the price to pull back to the S/R level and then go long.

The stop loss must be placed a few pips below the Strong S/R level.

The take profit must be placed at the most recent moderate or strong level.

Why use a Custom indicator instead of manual plotting the S/R levels?

There are several benefits of using KT Support and Resistance indicator in place of manual plotting:

Support and Resistance is a subjective concept, and there are several approaches to it. The indicator removes the ambiguity and plots only significant levels that hold the majority of the time.

Analyzing multiple timeframes is a tedious task. This is when the KT Support and Resistance indicator comes handy as it quickly draws the S/R levels using data from each timeframe.

Featured Product of the Month

Renko Charts – How to Trade using Renko on Metatrader 4/5

A Definitive Guide to Risk-Reward Ratio in Forex Trading